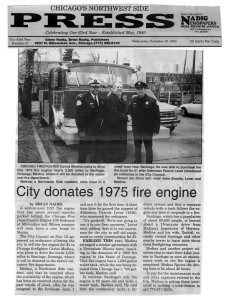 A visit to his impoverished hometown kicks a firefighter into gear.

Santiago Papasquiaro, in the Mexican state of Durango, sits at the foot of the Sierra Madre, among tan hills covered by a threadbare blanket of brush. Most of its young men have gone to America, so in the desert afternoons the public squares are empty, except for a few shuffling pensioners shielding their eyes with baseball caps.

Santiago is a city of 46,000, but it has only one fire engine. Built before World War II, with bug-eyed headlamps and a rounded red snout, it looks like a rig from Smokey Stover’s comic-book firehouse. Not long ago a lumberyard caught fire. The engine’s 100-gallon tank didn’t hold enough water to quench the blaze, and the city’s volunteer bomberos had trouble hooking into the water system, so they just pushed mounds of dirt around the fire to keep it from spreading. The old engine had beeen donated by a Bostonian, in 1980. Santiago needed a new benefactor.